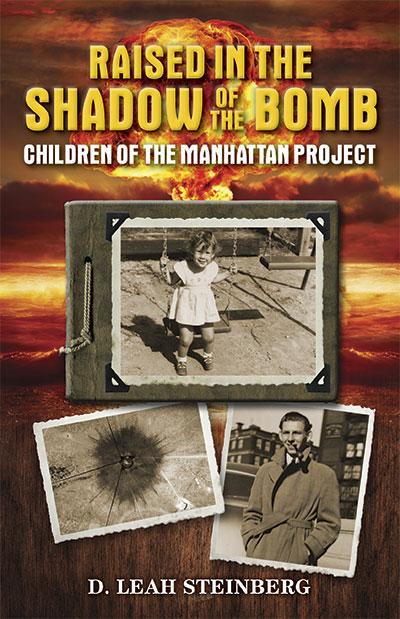 Truth Out: A Child of the Manhattan Project Discusses Complex Legacy of the Bomb

WGDR: The Magical Mystery Tour—Raised In The Shadow Of The Bomb & Three Lessons Of Revolutionary Love

Read updates and leave me comments at:

Roger McNamee rated it 5.0 out of 5 stars

How would your life be different if one of your parents had been part of the team that built the atomic bomb? I had not considered this question until I read Deborah Leah Steinberg’s “Raised in the Shadow of the Bomb” …

Steinberg is the daughter of one physicist who worked on the bomb and the niece of another. She interviewed more than a dozen other children and shares their stories, which are compelling. As you would expect, the range of experiences is wide. Some grew up without much thought about the bomb. Many more lived their entire lives in the “shadow of the bomb.” Seeing the world through their eyes opened mine.

I read about 50 books a year. Most are terrific, but only a few stick with me for years afterwards. Nearly a year after I read it, “Raised in the Shadow of the Bomb” is shaping up to be one of those books.

A Fresh Perspective on the Technology that Shaped Our World

I really enjoyed this book, it combines memoir describing the authors experience as a family member of two prominent atomic scientists with interviews of other children of the “atomic family”. The Manhattan Project was an immense effort on a national scale and this book explains how even immense efforts are ultimately the products of real people, with families and all of the other foibles to which we are susceptible. I was also particularly taken with the discussion of the relationship between Bohr and Heisenberg, showing how the fate of major world events can ultimately hinge on the relationship of two individuals.

The world we live in is very much the creation of these scientists and engineers. I think this book adds a crucial human element to how we got here, and how we might move forward into a hopefully more mature and secure world.

Raised in the Shadow of the Bomb:
Children of the Manhattan Project

This story began before I was born, when my father, Ellis P. Steinberg, and uncle Bernard Abraham worked on the secret undertaking that developed the first atomic bombs. These later were dropped over Hiroshima and Nagasaki.

It was not only my extended nuclear family that experienced and was affected by growing up at this time in history, but a whole generation of other children raised in the shadow of the bomb who had stories to tell.

The result is this book—part memoir, part discussions with siblings and cousins, and part interviews with a dozen others who had a parent who worked on the Project.

Paperback bound books available on this site and at:
Barnes and Noble
Kobo Books
Google

Used and E-Books available at: